The next time your stomach is growling as you dash from one office building to the next, you might want to watch your step. There’s a new kind of street food craze sweeping the country, and its ingredients could be right under your feet.

Urban foraging is an inside-the-city-limits version of the ancient practice of searching for and utilizing edible wild plants. And while it might seem surprising to think that a big-city environment could provide a between-conference-calls snack—much less the ingredients for a full meal—urban foraging has become wildly popular.

Chefs are taking to the streets to add foraged greens to their dishes. Parks and nature preserves are offering guided wild edibles tours. And while many cities are beginning to regulate urban foraging in public spaces due to its growing popularity—more on that later—municipal areas still offer savvy foragers an opportunity to spice up their daily meals with highly nutritious wild foods.

“Trying to survive on wild plants would be a serious challenge, but a diet made up of 10 percent wild foraged foods is as easy as can be,” says Mark Vorderbruggen, a Texas-based research chemist and edible wild plants expert who teaches urban foraging techniques at the Houston Arboretum and other Lone Star nature preserves. “And many of these plants are literally growing up around the sidewalk, so it’s mainly a matter of opening your eyes to what’s right there under your feet.”

Consider the redbud, a small flowering tree that grows on city streets across the country. It’s one of the earliest flowering trees, with stunning red-purple flowers that cling directly to the tree’s branches. Even if you don’t know the plant by name, it’s a good bet you’d recognize a redbud once it was pointed out.

And redbud is a prime urban foraging plant, says Vorderbruggen. In the spring, those striking flowers that turn the heads of passersby are delicious when plucked from the tree and eaten raw. They can be added to salads or used to top cupcakes and pies. And a few weeks after blooming, each of those flowers turns into a peapod. “Just like something you’d see in the grocery store,” Vorderbruggen says. “When they’re about a half-inch long, they are tender and delicious, and you can eat them raw or add them to a stir-fry dish.”

All from a common landscaping tree.

It’s the same with plants such as purslane and lambs- quarter, wild onion, and peppergrass. Urban environments around the country are chock-full of edible wild plants, from lesser known fruits such as persimmon to a virtual salad bar of greens that grow from sidewalk cracks to front yards to greenways. In the South, wax leaf myrtle is an oregano-like plant that adds a definite dash to lasagna. The tender leaves of common plantain have a nutty, close-to-asparagus taste and can be quickly stir-fried in olive oil. The young shoots of Japanese knotweed—a hated invader across much of the country—have a lemony, rhubarb-ish taste that’s led them to the kitchens of Manhattan chefs.

In fact, many of what we consider weeds in North America are actually beloved garden plants brought over by European settlers that now grow wild. Sow thistle and dandelion, Vorderbruggen says, were cultivated as food plants. But since they don’t have pests and predator controls in the American environment, they’ve spread so quickly and far that we now consider them weeds.

And while toxic plants abound—making plant identification a critical foraging skill—these wild foods can be very healthy. Foraging experts point out that the plants tend to be denser with nutrients than many of their cultivated counterparts, thanks to growing in soils that haven’t been depleted over decades of farming.

Collectors need to be aware of areas that have been sprayed with herbicides or pesticides, and stay away from older buildings with lead paint that can leach into soils. But many wild plants have dense root systems that tap minerals deep in the soil and transfer that bounty to delicious leaves, shoots, and flowers.

Every Rose Has Its Thorns

The growing interest in wild edibles has some cities working to make sure foragers don’t love a local park’s hedgerows to death. Cities such as Chicago and Washington, D.C., have outlawed foraging on public lands such as street rights-of-way and municipal parks.

It’s not allowed in New York City, although guerrilla foragers are common in Central Park. So, it’s always suggested to check local foraging laws wherever you are. And where foraging on public lands is allowed, be sure to stay away from sensitive habitats, such as wetlands, and take no more than you can use in a single meal.

And the best approach, says Vorderbruggen, is an even more hyper-local strategy. “Start in your own yard and in your own neighborhood,” he says. “Begin at your doorstep and identify the plants you see every day, and you will be amazed at what’s edible.” Then move out from your own yard to your neighbors’ yards.

When you walk the dog or ride a bike, figure out what plants look interesting, and you’ll likely see a few that can find a place on your plate.

“This is so much easier than pulling out an identification guide and looking for a particular plant,” Vorderbruggen says. And you sidestep any regulations on plant collecting when you forage on lands nearby. “Just ask a neighbor, ‘Hey, do you mind if I weed your lawn?’” Vorderbruggen laughs. “And then tell them what you find. People just can’t believe all the food that’s right there in the front yard.” 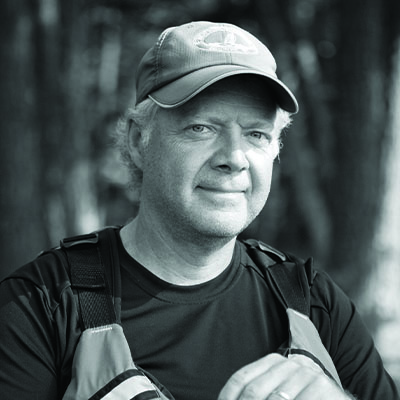